This article is part of the #PanzerDox series, exposing the customers and owners of the Neo-Nazi clothing company Panzer Streetwear. #PanzerDox is a collaboration between Colorado Springs Antifascists, Utah 161, Panic! in the Discord, and Corvallis Against Fascism.

Before reading this, please check out the previous article in the series for context.

This article focuses on the three men featured in this poorly-censored photo used as an advertisement by Panzer Street Wear: 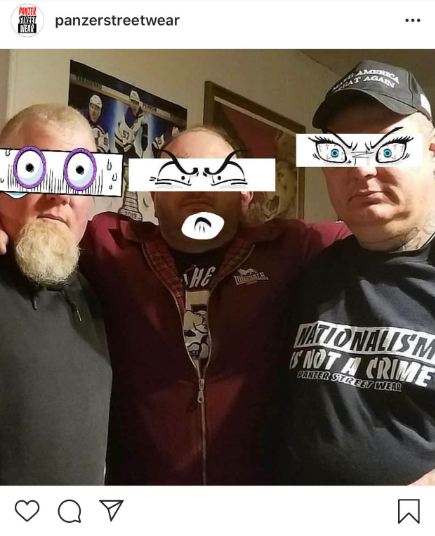 Panzer Street Wear is a company that sells overtly Nazi shit. Kimberly Westfall and Cody Reynolds don’t even try to hide it. Here are some examples of their products:

It was a cinch for us to find the uncensored photo and identify the models as Carl Lackey, Grant Emerson, and Matt Paterson from St. Louis, Missouri. 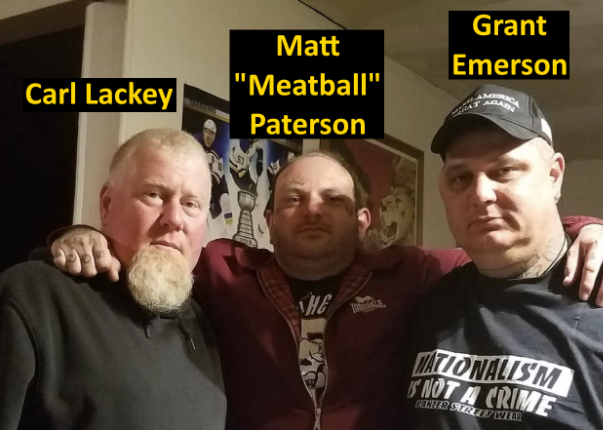 Carl Lackey is a member of American Guard from St. Louis, Missouri. The American Guard is a fascist group led by Brien James, a former klansman, hammerskin, founder of the bonehead (Neo-Nazi skinhead) gang Vinlanders Social Club, and also Indiana representative for the Proud Boys, in case you needed a clearer picture of how all these fascists work together.

5/ And these groups have deep ties to each other.

This is Brien James, founder of the American Guard, admitting that he's the head of the Indiana Proud Boys. pic.twitter.com/MIpbchuyer

Despite James’s long history of racist organizing, the American Guard says it is non-racist, a claim that has been disproved many times.

Lackey has showed up to numerous AG rallies. He was first identified by antifascist comrades in St. Louis, and again  after participating in Joe Biggs’s failed “End Domestic Terrorism” rally in Portland, Oregon. American Guard traveled to the rally on an armored bus, and one member attacked a counter-protester with a hammer. It was also reported that someone on the bus threatened civilians with a gun after the event.

Lackey and his fellow American Guardsmen were also present at a protest of a drag queen story hour for children in St. Louis. Protests like this are intensely homo/trans-phobic, and are intended to spread the obviously false narrative that all queer people are secretly pedophiles.

Lackey and his associates can be seen in this photo posing with an an attendee’s car, in an attempt to intimidate them.

Lackey is also known to be in a relationship with Heather Oaks of St. Louis. 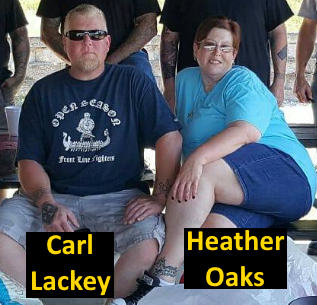 Carl currently lives at a property owned by Heather’s mommy and daddy. Information about his residence can be found at the end of this article.

Grant Emerson is another American Guard member from St. Louis. He can be seen in numerous photos posing with members of the group. At one point, Grant held the office of Sgt. at Arms for the Missouri chapter.

Grant is a bricklayer, and the owner of Emerson Tuckpointing-Bricklaying. He is also a member of Bricklayers and Allied Craftworkers Local #1 in St. Louis.

Do Bricklayers and Allied Craftsmen Local 1 know that one of their newer members holds a leadership office in a white nationalist hate group? Let’s see!

Grant seems to be pretty bad at his job. He apparently did 9k in damage to a customer’s neighbor’s car while he was working. 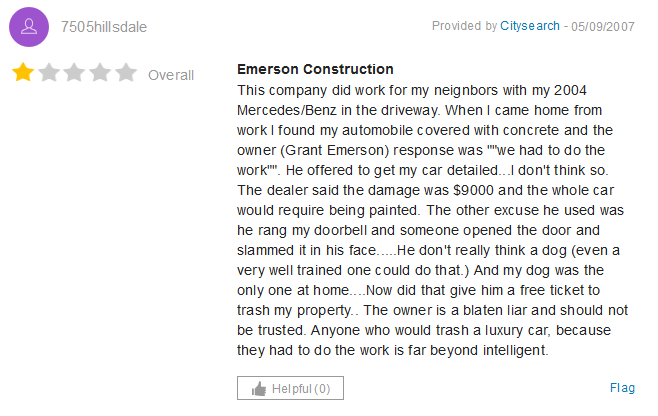 It should also be noted that Grant used his personal phone number and address when registering his company.

Matt Paterson is a bonehead from Granite City, IL (even though he has a St, Louis face tattoo), where his family resides. It is unclear whether or not Paterson is also a member of American Guard. However, he frequently socializes with St. Louis-based AG members.

Meatball is incredibly overt with his fascism. It’s no surprise he likes Panzer Street Wear, since he can frequently be seen wearing apparel featuring racist bands and symbols. He has a particular penchant for jewelry featuring the Celtic cross. Here are some photos of him wearing it as a necklace and a belt buckle. The squared-off version of the Celtic cross is one of the most prevalent symbols used by American Neo-Nazis, and is notably used as logo for Stormfront, the white nationalist forum.

He also reps merch from the white nationalist band Skrewdriver and the fascist gym Norse Fitness, which we exposed in our article on Wolf Brigade Gym.

In addition to being a garden-variety bonehead, Paterson is a big supporter of the boogaloo movement. The term “boogaloo” refers to an anticipated second American civil war, and its fans have built an entire subculture fetishizing this potential conflict. Boogaloo adherents are not necessarily racist, but people like Matt Paterson clearly demonstrate the presence of hard-core white supremacy within the movement.

Finally, his Instagram name itself is a fascist calling card. The number 88 is an alphanumeric code used by neo-Nazis to signify the phrase “Heil Hitler,” since H is the 8th letter of the alphabet.

In keeping our communities safe, it is essential to share information with everyone.

Due to the publishing requirements of this platform, we can’t directly share personal information like phone numbers and home addresses. However, you can view that redacted information here, on a separate website, to learn more about the homes of Carl and Heather, Grant, and Matt.

We must work to confront, disrupt, and de-platform them wherever they pop up. We expose the actual beliefs and actions of the members of cryptofascist groups like American Guard. While the group’s leadership may claim to be non-racist, the behavior of the members often tells a different story. The things they post online, the people they hang out with, and, hell, even the clothing companies they model for reveal their true intentions as white nationalists working towards genocide and race war.

If you have any additional tips about American Guard, Carl, Grant or Meatball or any other fascists, please send them to CVAntifa@riseup.net or DM them to @CVAgainstFash on Twitter