This article is part of the #PanzerDox series, exposing the customers and owners of the Neo-Nazi clothing company Panzer Street Wear. #PanzerDox is a collaboration between Colorado Springs Antifascists, Utah 161, Panic! in the Discord, and Corvallis Against Fascism.

Before reading this, please check out the first article in the series for context.

Panzer Street Wear is a company that sells overtly Nazi shit. Kimberly Louise West and Cody Monroe Reynolds don’t even try to hide it. Here are some examples of their products, archived from their deplatformed websites on Ecwid and Big Cartel:

Harvey “Zipper” Williams is a bonehead, also known as a neo-Nazi skinhead from Bryan, TX. He is a frequent customer of Panzer Street Wear and enjoys showing off their wears. 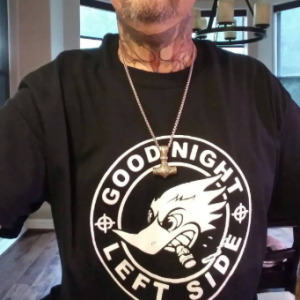 Like most of Panzer’s customers Harvey is a full blown neo-Nazi, and is anything but subtle about his ideology. It’s worth noting that Harvey’s Panzer Street Wear shirt is more than just a shirt…it has a whole bunch of white nationalist iconography in its design. First, there’s the general anti-left messaging which is anti-antifa and we all know that means pro-fascism, that’s how double negatives work. The ADL has a breakdown, outlining how anti-antifa is considered a hate symbol:

Then there’s the Celtic Crosses on the outer circle, which is another white power image that the ADL has information on:

Do note the connection to Stormfront, currently the biggest white nationalist internet forum. The SPLC has an article in their Fighting Hate series, on who they are, how they started and their influence in the US and elsewhere.

Then there’s Zipper’s necklace, the Thor’s hammer or the Mjölnir, which has deep roots in the Pagan and Norse religions sometimes called Asatru, Heathenry, which has been co-opted by the neo-Asatru, Odinist or Wotanist white nationalists, much to the anger and dismay of the practicing priests and priestesses, as reported in The Atlantic.

Finally, there’s the Woody Woodpecker-looking cartoon character, which is actually a peckerwood, a designated hate symbol. Again from the ADL:

Notice the similarities between the ADL’s example of a peckerwood hate symbol and Harvey ‘Zipper’ Williams’s shirt:

Zipper’s white nationalist ideology has caused him significant problems in the past. He has reportedly been fired from two jobs because of his massive “GESTAPO” neck tattoo. After his second firing, ole Zipper finally got wise and covered it up. However, he is very vocal about how his ideology has not changed. 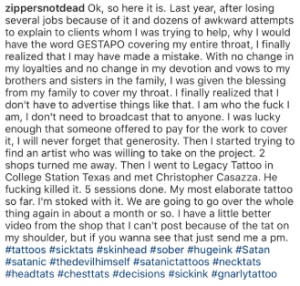 Harvey allows fascism to permeate nearly every facet of his life. This disgusting motherfucker even named his cat Adolph.

One of the most remarkable aspects of Harvey’s dumbass maximalist aesthetic is his car. It’s a cherry red Honda that is completely covered stickers for shitty dad bands and Nazi trash.

Harvey is married to Leya Fletcher. It is apparent that Leya shares her husband’s toxic political ideology. The pair can even be seen wearing matching Trump outfits. 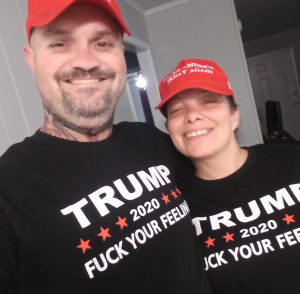 Zipper has also been used in marketing materials for DopeSick Apparel, a straight edge brand that promotes sobriety and healthy living. Consider hitting them up and ask why they’re using an open fascist to sell their products.

Ways to contact DopeSick Apparel, where Zipper has been featured:

If you have any additional tips about the Harvey Zipper & Leya Williams or any other fascists, please send them to CVAntifa@riseup.net or DM them to @CVAgainstFash on Twitter